Hotels have largely been dismissive of any threats to their core business model over the past five years.

However, by 2020 the exponential growth of various online platforms will have forced them to change and innovate—or force them out of business. The good news is that traditional hotels have numerous options at their disposal: rethinking the experience they offer, unbundling pricing, setting up new partnerships and more.

The past twenty years have seen a lot of changes in the way hotels are marketed and sold, not least thanks to OTAs and price comparison sites (and apps). “Six years ago, there were 20 million reviews on TripAdvisor. Last year, there were 170 million. When something is growing at that rate, you have to ask what it will be like in 2020,” says Adrian Richards, national leader of hospitality and tourism at Grant Thornton UK.

But the latest threat to the industry started off in an unlikely place: people’s sofas. What was initially a means for people to find a spare bed in a new city has rapidly evolved into a highly traded marketplace, with everything from flats to castles on offer. The biggest of these is Airbnb. It acts as a platform, without the need to own, develop or maintain any rooms of its own. “This holds huge ramifications in terms of the speed at which it can scale,” says Ramón Galcerán, a partner at Grant Thornton Spain

Until now, though, the hotel industry has largely dismissed the sharing economy. But the numbers are telling. Between February and December 2014, Airbnb’s stock of available rooms expanded from about 300,000 to over one million1 . This puts it ahead of InterContinental Hotels Group (IHG), Hilton, and Marriott as the world’s biggest provider of rooms.

Of course, Airbnb remains a relative minnow in terms of actual guest bookings. A recent Barclays report estimates that Airbnb sold about 37 million room-nights last year; by contrast, IHG sold 177 million. Yet Airbnb was only founded in summer 2008, while IHG traces its history back to 1777.

Furthermore, there are still differences across regions. Alvin Wade, national leader of hospitality and tourism at Grant Thornton US, says, “to me, millennials would be more interested in Airbnb. I think that it’s a long way from posing a significant threat in the US.”

Yet, as millennials grow in influence, we can expect Airbnb to make a more pronounced impact between now and 2020. As Frank Croston of Hamilton Hotel Partners puts it, “in my business, all of the sub-35s are booking holidays via Airbnb or similar. That’s a bit scary, not least as they’re all in the hotel industry themselves.” Robin Sheppard of Bespoke Hotels adds, “Airbnb is here to stay and we need to get used to it.”

Thus far, hotels have largely adopted the strategy of ignoring the platform, or hoping regulators will solve the problem for them by requiring health and safety compliance, and to charge taxes on listings. Greater regulatory oversight is likely inevitable by 2020, but it is unclear to what extent this will slow the growth of the sharing economy. Many hoteliers also believe that sites like Airbnb operate in a fundamentally different niche to theirs: it’s not for business travellers, they argue, it’s just for students looking for a spare sofa, or people willing to share a room. But if hotels do not adapt by 2020, we believe they will face significant disruption. 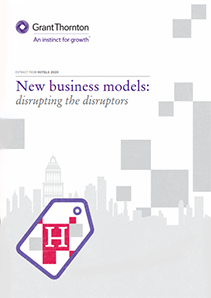