To find out more about cookies, what they are and how we use them, please see our privacy notice, which also provides information on how to delete cookies from your hard drive.

The hotel sector in Ireland has experienced dramatic pendulum change since the economic downturn commenced in 2008. This change has been most evident in the overall decline in RevPAR, from a high of €68 in 2007 to a low of €43 in 2010, with a subsequent recovery to €54 in 2014. This recovery has been achieved on the back of a number of key factors including:

Consolidation of ownership, particularly in urban areas, will ensure that only the fittest will survive into the future. During 2014 there were 63 (2013: 40) hotels sold in Ireland at a combined value of €314.2million (2013: €250million). A further €355 million of Irish hotel transactions (17 properties) were at legal due diligence stage at the end of 2014, suggesting that 2015 is set to be another busy year in the sector.

While traditional reports on the hotel sector tend to focus almost exclusively on historic data, Grant Thornton have commissioned this global survey to explore what the customer needs and wants will be in 2020. This insightful document will focus on ‘four main themes’ that have been identified globally as key differentiators that will help identify ‘winners’ within the hotel sector in the medium term.

These four themes are as follows: 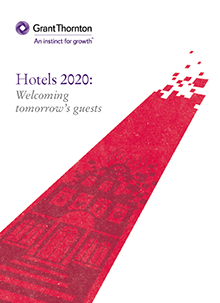