The Chancellor announced an additional NRB for main residences of £100,000 for 2017/18, increasing to £175,000 in 2020/21. This will apply on deaths from 6 April 2017. This new NRB will be transferable between spouses or civil partners and will only apply to transfers to direct descendants. The value of the NRB will be restricted to the net value of the interest in the residential property. There will also be a tapered withdrawal of the NRB for estates with a net value of more than £2 million.

A new restriction on pension’s tax relief for individuals with incomes above £150,000 (taking into account pension contributions) will apply from 6 April 2016. This new restriction will taper the annual allowance for these individuals to a minimum of £10,000. The government will also consult on undertaking a wider reform of the tax regime for pensions.

A surprise announcement was the abolition of the dividend tax credit coupled with the introduction of a £5,000 tax free allowance for dividend income. The change will take effect from April 2016. Thereafter tax will be levied on dividends received in excess of £5,000 at rates of 7.5%, 32.5% or 38.1% depending on the taxpayer’s marginal rate. Dividends paid within pensions and ISAs remain tax free.

Restriction on relief for landlords

Relief will be restricted on finance costs for landlords who let residential property. The relief is currently at their marginal rate of tax but this will be reduced to the basic rate, being phased in over four years starting from April 2017. The existing wear and tear allowance for furnished let property is also to be replaced from April 2016 with relief based on actual costs. In addition as from April 2016, rent a room relief will be increased from £4,250 to £7,500 to simplify administration and reduce the tax burden of renting a room within a landlord’s house.

From 6 April 2017, those who have been resident in the UK for more than fifteen out of the past twenty tax years will be treated as deemed domicile for all tax purposes.

This will mean that they will no longer be able to use the remittance basis and they will also be deemed domiciled for inheritance tax purposes. In addition, those who had a domicile in the UK at the date of their birth will revert to having a UK domicile for tax purposes whenever they are resident in the UK, even if under general law they have acquired a domicile in another country.

The government will also have a consultation on amending the rules regarding excluded property so that trusts or individuals owning UK residential property through an offshore company, partnership or other opaque vehicle, will pay Inheritance Tax (IHT) on the value of such UK property in the same way as UK domiciled individuals. The new rules will be introduced as of 6 April 2017.

The government will continue to clamp down on tax avoidance, planning and evasion by increasing resources for HMRC, and in addition, is consulting on introducing legislation to allow HMRC to make regulations to impose customer notification obligations on financial institutions, tax advisers and other professionals. This may include obligations to notify customers or clients of certain pieces of information relating to information HMRC itself will receive under international agreements to improve tax compliance, the law relating to offshore tax evasion and associated criminal and civil penalties, and opportunities that HMRC will make available to individuals to disclose their tax affairs.

An increase in personal allowance 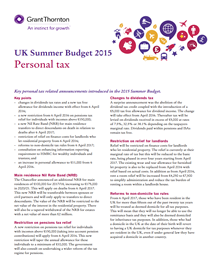