Mr Gillan, who takes over as Chairman from Niall Harkin, is Managing Partner of Grant Thornton in Northern Ireland.

Addressing the Society’s AGM Mr Gillan said: “What the business community needs now - and what Northern Ireland needs now – is strong leadership. With so many unknowns around Brexit and the democratic deficit at Stormont, Northern Ireland is in a period of huge uncertainty.

“With the challenges facing our country and our economy, the skills of our profession are needed more than ever.

“As Chartered Accountants, whether we work in practice, in business, in the public sector or the voluntary sector, we have a vital role to play in the year ahead. Our members will be at the forefront of helping local businesses to deal with the reality of Brexit.

“Our members are hugely frustrated by the democratic deficit at Stormont. We will continue to engage with the local political parties in the hope that we can help them to find a way to work together and to display the leadership which is needed.

“We will do what we can to move Northern Ireland forward, to be a strong advocate for business and to be a strong voice for the Chartered Accountancy profession.”

During his first speech as Chairman, Mr Gillan also said that he would seek to encourage a new generation to the profession by showcasing the value of Chartered Accountancy skills and training and by highlighting the varied career paths offered by the qualification.

Prior to joining Grant Thornton in 2014, Mr Gillan successfully owned and managed a manufacturing business and then an outsourcing company. During his career he has worked in London, Luxembourg and Johannesburg. He trained as a Chartered Accountant with Price Waterhouse after completing an Accounting degree and postgraduate diploma at Queens’ University. 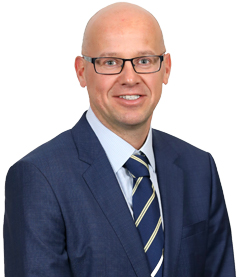