Election 2019: what the Conservative Party manifesto means to you

With a general election confirmed for 12 December, the political parties are now in the process of launching their manifestos.

The Conservative Party Manifesto 2019 and accompanying Costings Document sets out a number of policies. We summarise below the key tax policies announced including:

The manifesto proposes that a Conservative government will “redesign the tax system so that it boosts growth, wages and investments and limits arbitrary tax advantages for the wealthiest in society”. 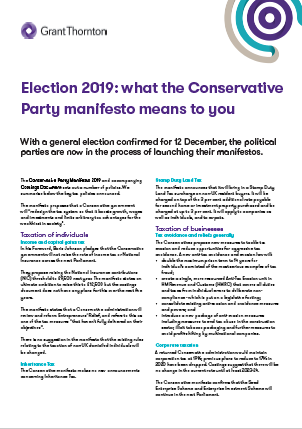