The IASB has issued 'Recognition of Deferred Tax Assets for Unrealised Losses' which makes narrow-scope amendments to IAS 12 'Income Taxes' (the Amendments).

The focus of the Amendments is to clarify how to account for deferred tax assets related to debt instruments measured at fair value, particularly where changes in the market interest rate decrease the fair value of a debt instrument below cost.

The Amendments add guidance to the Standard in the following areas where diversity in practice previously existed:

The Amendments are effective for annual periods beginning on or after 1 January 2017. Earlier application is permitted. 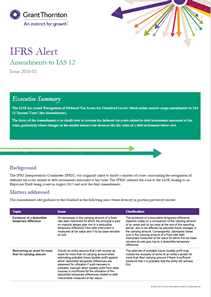