The IFRS Interpretations Committee (IFRIC) has issued ‘IFRIC 22 Foreign Currency Transactions and Advance Consideration’. It looks at what exchange rate to use for translation when payments are made or received in advance of the related asset, expense or income.

Although IAS 21 ‘The Effects of Changes in Foreign Exchange Rates’ sets out requirements about which exchange rate to use when recording a foreign currency transaction on initial recognition in an entity’s functional currency, IFRIC had observed diversity in practice in circumstances in which an entity recognises a non-monetary liability arising from advance consideration. The diversity resulted from the fact that some entities were recognising revenue using the spot exchange rate at the date of the receipt of the advance consideration while others were using the spot exchange rate at the date that revenue was recognised.

In carrying out their analysis of the issue, IFRIC noted that the issue was not restricted to just revenue transactions. For example, the same issue arises for transactions such as a sale of property, plant and equipment or the purchase of services when consideration is denominated in a foreign currency and is paid or received in advance. 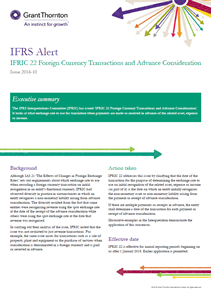