Potential consequences of the US tax reform for IFRS preparers

On 22 December 2017, the President of the United States signed into law what is commonly known as the ‘Tax Cuts and Jobs Act’. The Act is the most comprehensive reform of US taxation since 1986 and makes sweeping changes to both individual and corporate taxation.

Foremost among the changes is the reduction in the US corporate tax rate from 35% to 21%. There are however a number of other changes which are aimed at encouraging economic growth and reducing the incentives for US companies to shift their tax base to low- or no-tax jurisdictions.

We discuss a number of these areas in our publication and set out our views on the financial reporting issues arising from them.

The Act is a complex piece of legislation and IFRS preparers with operations in the US will need to spend a considerable amount of time analysing it in order to understand how it may impact accounting for income taxes in their financial statements.

Furthermore, because the Act became law on 22 December its effects must be included in interim and annual reporting periods that include that date. With many companies preparing financial statements for annual reporting periods ended
31 December 2017, this could have a potentially material impact due to both the complexity of the Act and the difficulty of gathering information in relation to some aspects of it. 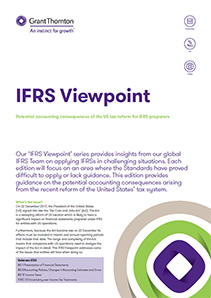