Talk of a customs union is growing - but what does it mean?

What is a Customs Union?

A customs union involves a group of countries agreeing to charge the same import duties as each other and usually to allow free trade between themselves.

This means that within the customs union there are no tariffs on goods and that each country agrees to treat imports from outside the union in the same way – eg imposing the same tariffs to outsiders (also known as the Common External Tariff).

The difference between ‘a’ and ‘the’ Customs Union

Essentially the difference is the range and depth of co-operation that exists in terms of trading goods.

‘The’ customs union (eg UK as a member of EU):  Goods originating from within the EU, or those that have cleared customs and have had their taxes paid, can move freely across the EU customs union, without additional checks or documents (eg customs entries).

There is a Common External Tariff, meaning all members treat imports from outside the union (3rd countries) the same. Negotiations on trade deals with 3rd countries take place as a single trading bloc – the EU negotiates deals, not individual members, though all are involved. The extent to which the UK could be involved in these negotiations post-Brexit is up for debate, but leaving the European Union is likely to reduce UK influence.

‘A’ customs union (eg Turkey) – Goods in free circulation or originating from within the group can move without tariffs between members. Customs declarations and documentary evidence that goods qualify are required.

There is also a Common External Tariff that must be applied. However, Turkey is not involved in its negotiation. In addition, Turkey must abide by the outcome of new EU trade deals and give tariff free access to its domestic market to countries the EU reaches agreement with, but it does not get guaranteed reciprocal access. In this scenario the UK could ask individual countries to apply the EU’s existing FTAs to the UK – however the UK has had limited success in these negotiations to date.

What’s covered and what is not?

It does not cover:

Will it provide frictionless trade?

Custom unions can streamline border checks, but they do not eliminate them. For frictionless trade regulatory harmonisation is required.

What does it all mean for your business?

Even if we join ‘the’ customs union, there would still need to be regulatory checks at the border unless we align closely to EU regulations. For goods being exported from the UK to the EU, exporters will need to have evidence that the product can enter free circulation within the EU (i.e. proof that it meets all EU market requirements).

The table below summarises some of the options being discussed and their respective implications: 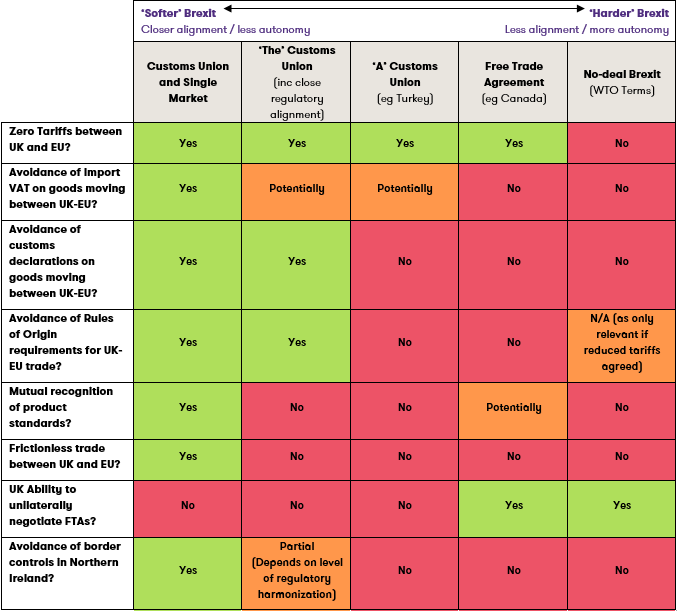 Regardless of what the final Brexit agreement is on customs, organisations can take steps to prepare for any Brexit eventuality:

The issues around a customs union proposal are complex and do not seem to be completely understood by MPs. The key point for business is that trade may not be as frictionless as it is at present if we join “a customs union”.